WASHINGTON – The U.S. Environmental Protection Agency (EPA) is recognizing two companies for innovative new products that recycle wasted energy and turn it into usable electricity in homes or small buildings. Micro combined heat and power (CHP) systems are an emerging technology that can help change how we use and produce energy in our homes while protecting people’s health. When offsetting purchases of coal-generated electricity in cold climates, this emerging technology can reduce energy use and curb carbon dioxide emissions by 20 to 30 percent.

As winners of the 2011 Energy Star Emerging Technology Award, Freewatt micro CHP system made by ECR International, N.Y., and the Ecopower micro CHP system made by Marathon Engine, Wis. are helping home and small building owners, particularly in the Northeast region, produce their own electricity, reducing their utility bills. These technologies capture wasted energy from space or water heaters and turn it into usable electricity from a single fuel source.

Although the technology has been successfully used in larger applications for many years, micro CHP systems have only recently been commercialized for small scale use in residential homes, apartment buildings and small office buildings. This year’s winning micro CHP systems met strict criteria for efficiency, noise, emissions and third party-verified performance. In addition to submitting laboratory test results, products were monitored in the field for a minimum of one year to be eligible for recognition.

It might seem like a common-sense approach for pharmaceutical makers to re-use solvents instead of incinerating them, but many companies don’t. A new study suggests they should.

Researchers for the first time have quantified the benefits of reusing the solvents. They find that recycling produces fewer emissions and uses less energy than making those chemicals from scratch. These results show the most important way that manufacturers can reduce waste – particularly carbon dioxide emissions.

By far, solvents are the biggest contributors to pharmaceutical-related emissions, the authors report in the December issue of Green Chemistry. Their research shows that the amount of energy needed to produce fresh solvent and burn waste is much higher than the energy needed to run reduction and recycling programs.

Solvents far outweigh other chemicals in pharmaceutical manufacturing; pound for pound they account for more than 80 percent of the materials used in the average process. They serve a useful role, helping to bring reactants closer together and washing away impurities between steps.

But, this comes at a price: solvents also account for more than 80 percent of the nearly 200 million pounds of waste emitted by the industry. Beyond the factory gates, there are also hidden costs in terms of carbon dioxide emissions. Carbon dioxide is produced from the fuel used to heat chemical reactions and transport products between plants. Considering the entire life cycle of a solvent, as much as 98 percent of the environmental emissions can be due to carbon dioxide.

The scientists considered three case studies: one was an oncology drug being developed by Bristol-Myers Squibb, the second was Pfizer’s Celebrex product, and the last was a manufacturing intermediate used by Novartis to produce a hypertension drug. In each case, the researchers tallied up all the energy and materials used as well as all of the environmental emissions. Their analysis included manufacturing of solvents that occurred outside the pharmaceutical factory itself. They compared scenarios with or without the use of solvent reduction and recycling techniques.

In every case, cutting back on fresh solvent or burning less solvent waste reduced emissions by more than 90 percent. It was also seen that some solvents have a much greater impact than others. For example, one of the most widely used solvents is tetrahydrofuran, which causes 10 times as much water use in the manufacturing plant and accounts for more energy use – cradle-to-grave – than any other solvent tested.

This research shows there are definite environmental benefits to solvent reduction and recycling and provides examples of how this can be put into practice. 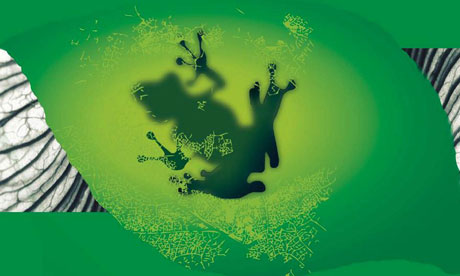 A revolutionary artificial foam which captures and converts the Sun’s energy more effectively than living organisms has won the Earth Awards 2010. Illustration: The Earth Awards

An artificial foam inspired by the meringue-like nest of a South American frog has won the 2010 Earth Awards. The foam, which could help to tackle climate change, soaks up carbon dioxide from the atmosphere and generates sugars that can be converted into biofuel.

The Earth Awards were set up in 2007 to bring together green start-ups strapped for cash with investors. Between March and May, over 500 designs were submitted to a panel of judges that included Richard Branson, Jane Goodall, David de Rothschild and Diane von Furstenberg.

The panel awarded $10,000 each to six finalists in August. Tonight, the winning design – a photosynthetic foam developed by David Wendell and Carlo Monetmagno of the University of Cincinnati – was awarded $50,000 at Marlborough House, London, as part of the Prince of Wales’ Start Festival.

The foam, which will be installed in the flues of coal-burning power plants, captures carbon dioxide and locks it away as sugar before it has a chance to enter the atmosphere and contribute to climate change. Due to its frothy structure, the foam can be up to five times more efficient than plants at converting carbon dioxide into sugar.

Wendell knows that the foam is manufacturing sugar – glucose – but he hasn’t yet managed to extract the sugar in order to convert it into biofuel. Wendell says creating a biofuel like this is desirable as it reduces the pressure to grow biofuel crops on land for crops, and keeps the price of staple foods like cereal and rice down.

The secret to the foam’s success is a protein that the Tungara frog uses as scaffolding in its foamy nests. “I read about a protein that the frog uses that allows bubbles to form in the nest, but doesn’t destroy the lipid membranes of the eggs that the females lay in the foam, and realised that it was perfect for our own foam. The foam contains a mixture of over 11 different enzymes harvested from bacteria, plants and fungi. It fixes carbon dioxide as sugars like fructose and glucose at a rate that exceeds that found in plants,” Wendell said.

According to Rick Fedrizzi, chief executive of the United States Green Building Council, one of the award judges, Wendell’s idea and those of the other finalists were “amazing but wouldn’t necessarily have seen the light of day without the Earth Awards”.

“Cash prizes are great but the real benefit of the Earth Awards is that your idea or technology is recognised by your peers,” says Fedrizzi. “Plus you get to network with venture capitalists, who might choose to invest in you at a later stage when your idea is more tangible.”

Fedrizzi’s favourite entry was the Sustainable Shell, a biodegradable home that can be built from the soil on which it sits. “You might be living in the Serengeti in Africa with access to nothing but mud and water, but by using these design principles anyone can build a strong, sustainable shelter,” he says.

Designed by Michael Ramage of the Department of Architecture at Cambridge University, the home will probably be a hit among NGOs seeking to rebuild regions like Haiti that have been devastated by natural disasters. It’s also very beautiful, says Fedrizzi: “It brings to mind centuries-old Moorish temples.”

Among the other finalists is Jamie Lim, a Malaysian ethical designer who has created a range of sunglasses hand-crafted from bamboo – a fast-growing, biodegradable and low-carbon alternative to plastic. For every pair of “KAYU” sunglasses bought, Lim donates $20 towards surgery that restores sight in the developing world.

Another design recognised by the awards was Arthur Huang’s Polli Bricks – a low-carbon form of cladding made from recycled plastic bottles that can be wrapped around buildings to insulate them. They come studded with solar-power LED lights and cost around ten times less than conventional cladding.

Not all of the entries into the Earth Awards were tangible structures, however. The Biomimicry Institute in Missoula, Montana, submitted Ask Nature – an open source digital library that allows people to find out how nature has solved problems that now confront humanity.